1. The most ideal time for traveling to Paris.

Because the country has a temperate climate, the seasons in Paris are quite distinct. Spring is the favorite season of the French because of the romantic weather and the streets, balconies or in every house are adorned with flowers. The pleasant weather of summer is also the peak tourist season of this city, people flock to swimming pools, artificial beaches to soak in the water or enjoy the sun. In the winter it is still sunny but quite cold and murky, though you can still enjoy a Paris with snow. 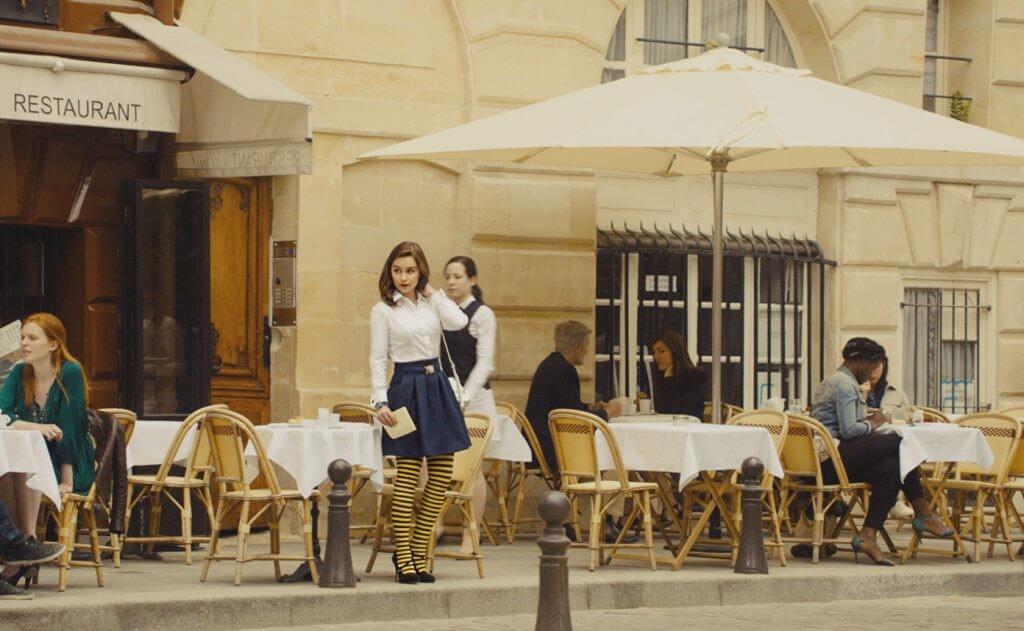 According to the self-sufficient Paris travel experience of many people, the best time to come to Paris is from the late spring (April) to early summer (June) or autumn, when the weather is still cold but pleasant. If you want to save the maximum cost, you can travel to Paris in the low season like between April and November. 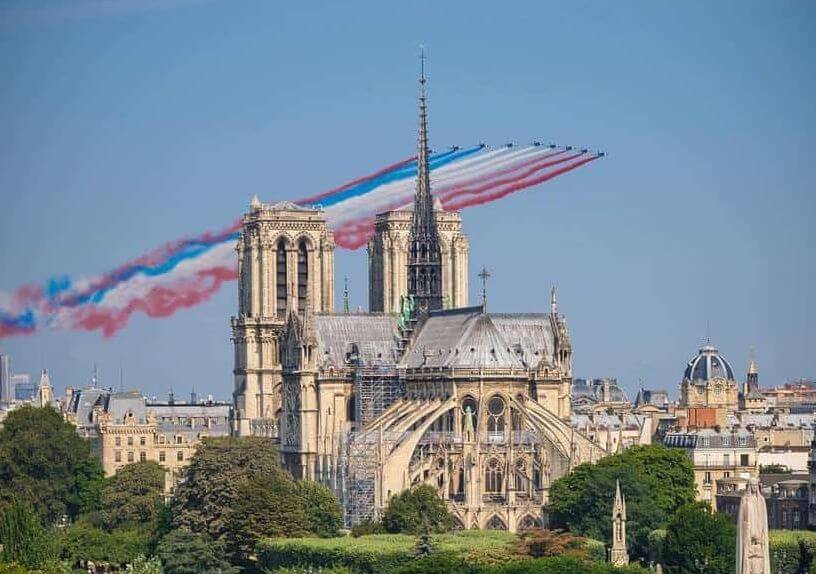 You can also go to Paris in the months of festivals and events to learn more about the city's cultural history, such as Bastille (July 14), Nuit Blanche (October), Christmas (December) ... If you come to Paris in mid-April, you will also have the opportunity to see the beautiful cherry blossoms at Parc de scaux.

2. Transportation in Paris.
In general, the cost of traveling between Paris and airports is quite expensive, so if you go from other EU countries to Paris, you should consider taking the train to reduce costs, stop at the center and not take much time.

- If you arrive in Paris via Charles de Gaulle airport: find your way to the airport by train to transfer to Terminal 2, take the RER B train to the city center (fare is about 10 €), this route also goes through some stations like Notre Dame or Gare de Lyon. Or you can choose other means but the travel time will be longer like bus 350 & 351, night bus 140 & 143 (running from 12pm - 5am), taxi or uber.

- If you arrive in Paris via Orly airport (the second largest airport after CDG): you can take a bus to the city center, the end point is Denfert Rochereau station. Fares are about 8-10 €. 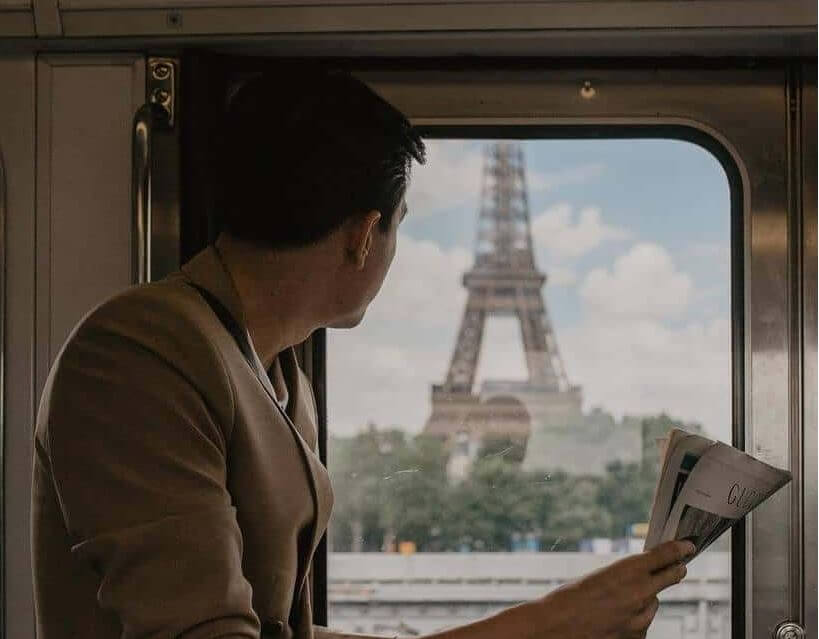 - Travel in the city center:

According to the self-sufficient Paris tourist experience, the two most popular means of transportation in Paris are Metro and RER, divided by service area. Paris is divided into 5 main zones and RER serves all 5 zones, including 2 central zones that can use both Metro and RER. Traveling by train is very convenient because train stations are almost everywhere in the city and extremely scientific. 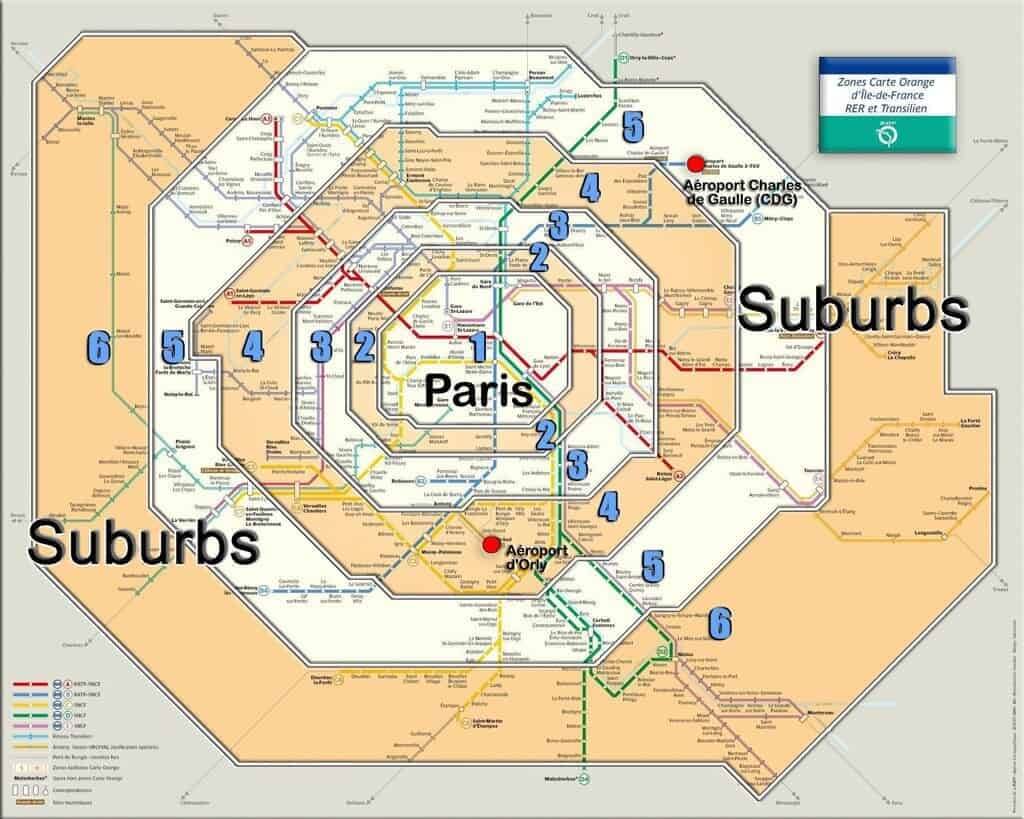 + Metro: There are currently 16 subway lines numbered from 1 to 14 and 2 additional lines 3bis and 7bis, 381 stations. Metro is often used to move in the center (on tickets with the M sign) and you need to distinguish Metro and RER to avoid confusion because if you board a train without a ticket or a ticket that is not at the destination you have Can be fined. Single fare (also known as Ticket t +) for a metro of about 1.8 €, if you go a lot you can buy a 10-trip pass (carnet ticket) for a price of about 14 €.

+ RER: RER ship is divided into 5 lines A, B, C, D, E and passes through many major destinations in Paris such as Eiffel Tower, Versailles, Disneyland or Charles de Gaulle airport & Orly airport. Before you go, you need to specify the location of the destination station in the zone, if outside the zone 1,2, you must go to the RER train and not the Metro.

+ Changing the line between Metro and RER is not too complicated, but if there are many plans to move but you have to change the line, you should change the line metro - metro to make it easier.
- Some types of tickets for Paris tourists are self-sufficient:

+ Paris visit: tickets are not limited to 1 to 5 days in Paris, apply for zones 1-3 or zone 1-5. You can buy it at the airport or train stations, noting that this ticket only works on the number of days recorded on the ticket.

+ Ticket Mobilis: similar to Paris visit but allows unlimited travel within certain zones and cannot be used for the airport exit, which is also cheaper than Paris visit.

+ Jeunes: unlimited day passes on weekends and holidays, for people under 26 years old.

- Some notes when traveling by Metro and RER in Paris:

+ You can buy tickets at the automatic ticket machines at the train station but note that the machine only accepts coins, does not receive paper money

+ Remember to determine the right direction of the train, each train line has 2 directions, note the signposts at the train station.

+ Note to keep your ticket during the journey, if checked without tickets will be fined 35 €.

- In addition to metro and RER you can also travel by bus during your stay in Paris, tickets are sold on the car, about 2 € / turn. 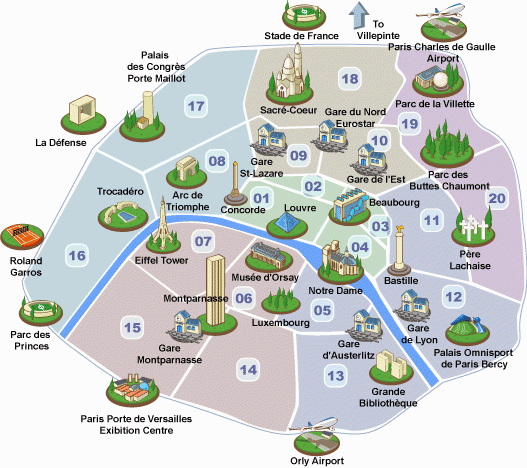 The first place not to be missed is the symbol of Paris - the Eiffel Tower towering right next to the poetic Seine in the east of the city. Arriving in Paris without checking-in a plate with the Eiffel Tower is also considered to have not come to this city already. If you just stand outside to take a picture, it will not cost you, but if you want to see the whole view of Paris from the top of the tower, it costs a fee of 15 €. 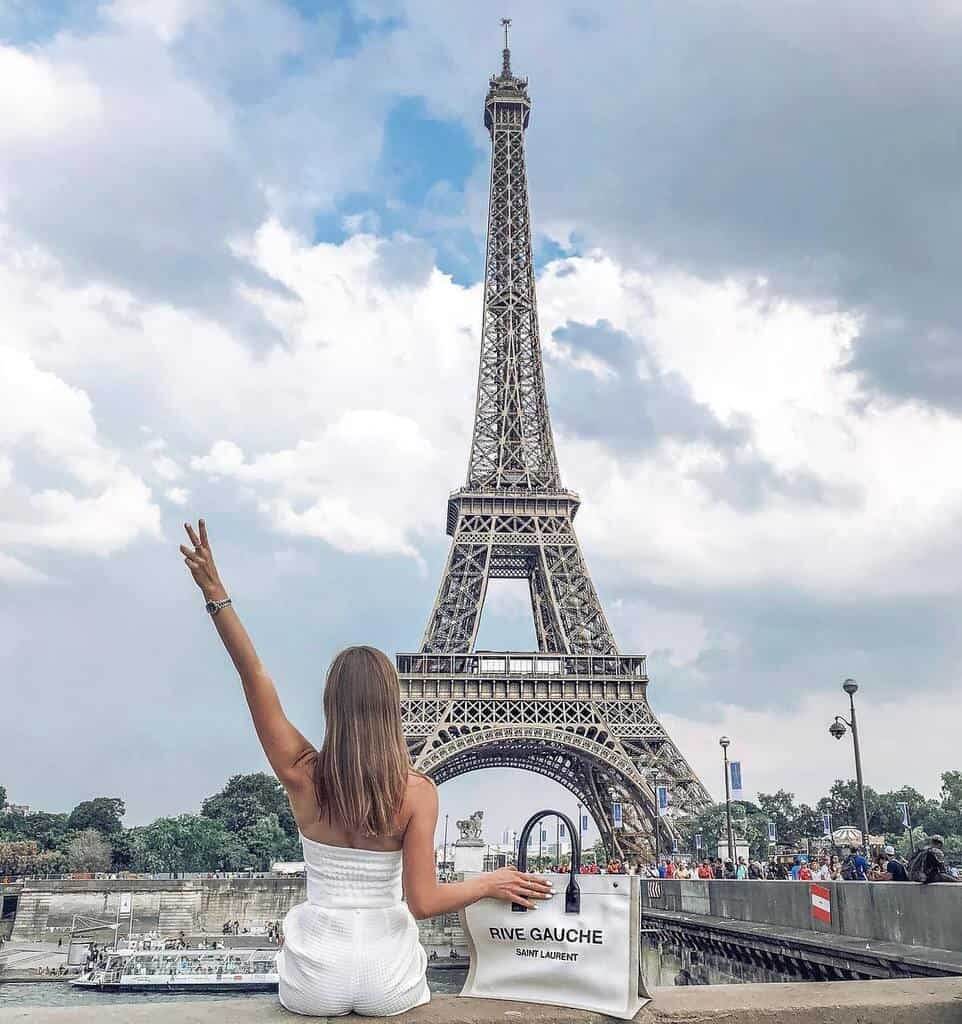 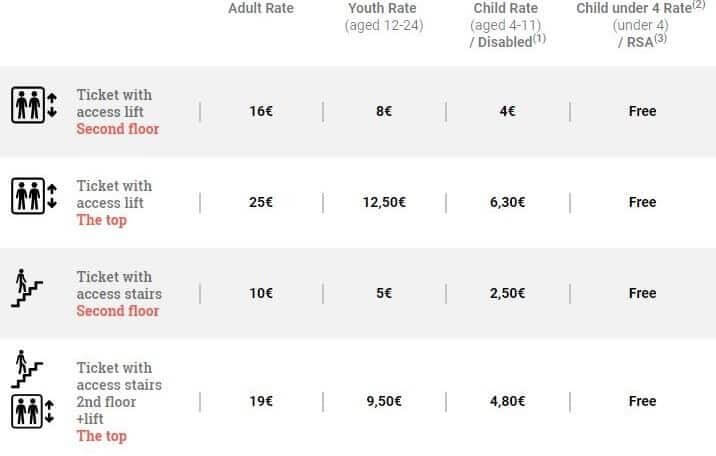 If you've ever imagined the scene in "The Hunchback of Notre Dame", you should set foot in this 'original' Paris Cathedral in France once. Not only is one of the largest and most famous Catholic Churches in France as well as Europe, Notre Dame Cathedral is also a symbol of French Gothic architectural style, sculptures and glass panels. The color in the church also contrasts with the classic Romanesque style.

This is one of the most famous works of Paris and along with the Champs-Elysées is the venue for festivals, events or celebrating sports victories. Another special thing is that all roads in Paris are poured here and tourists gather very crowded day and night. At the two points of view on the top of the porch you can also enjoy panoramic views of Paris. 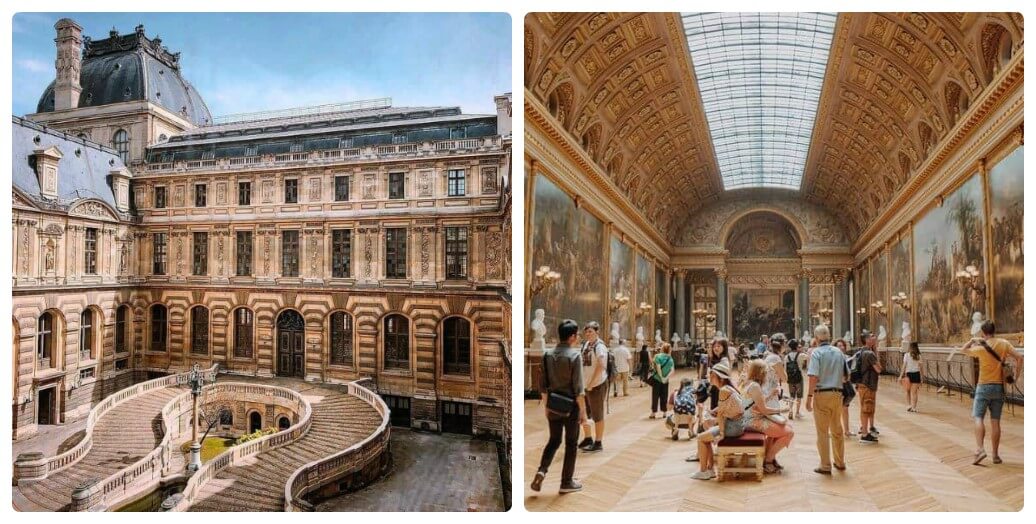 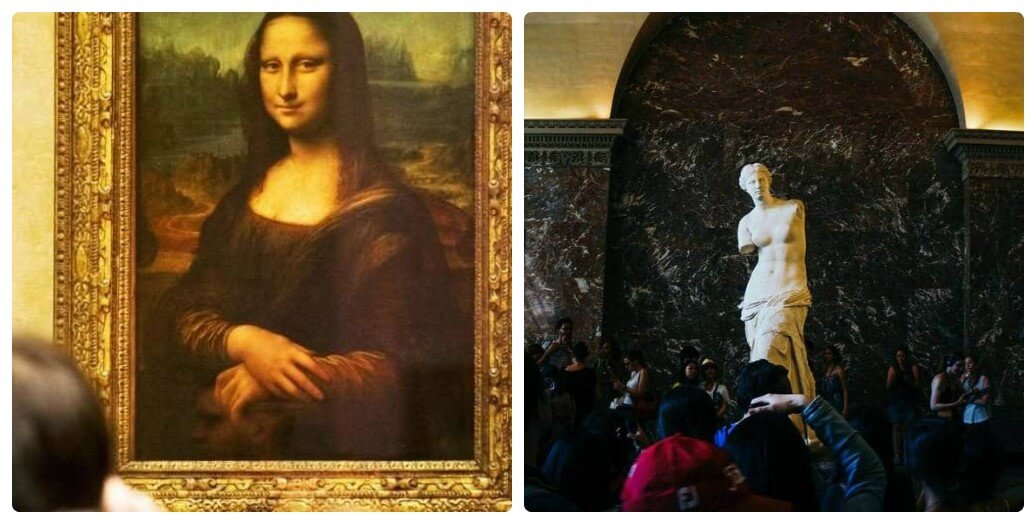 The Louvre Museum is quite close to Notre Dame Cathedral and some other attractions that you can combine with the Tuileries garden, Luxembourg garden, Sainte Chapelle, La Conciergerie and Concorde square, straight from the boulevard of the boulevard. Champs Elysees.

In addition, the Palace also has many attractions for visitors to visit, admire such as the Royal Trianon and Petit Trianon royal palaces, the spacious Versailles gardens with fountains, canals, beds Colorful flowers, created for the last queen of France - Queen Marie Antoinette.

On Montmartre hill there is a wall written "I love you" written in many languages ​​in the world in the garden Abbesses is also worth visiting. To reach the Montmartre hill you can stop at the last Metro points Abbesses or Lamarck Caulaincourt (line 12 Porte de la Chapelle - Mairie d’Issy); Anvers or Blanche (Line 2 Porte Dauphine-Nation) then walk a short distance to.

The Seine is associated with the romantic stories of Paris where you should once stop watching, or sitting on a relaxing yacht watching the poetic scenery on both sides of the river, enjoying the cool breeze and the peaceful atmosphere of the French capital. 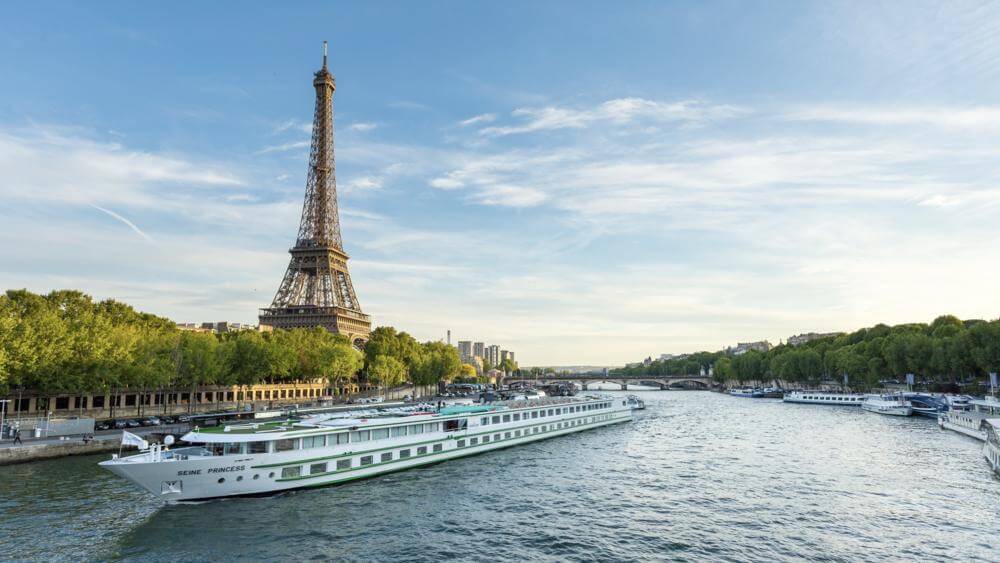 In addition to the above locations, the city of Paris still has countless attractive destinations that if you have a certain time to visit like the Moulin Rouge red windmill, there is also Disneyland Paris amusement park, Bastille fortress. ...or from Paris you can combine discovering other interesting French cities like Nice, Lyon, Marseille - one of the oldest cities in Europe or Besançon - the home of the famous writer Victor Hugo ...

5. Some notes when traveling to Paris.

- If you are interested in visiting the museum, you should take note of the first Sundays of each month that many free open museums like the Louvre, Musée d'Orsay, Musée du Quai Branly, Pompidou Center and Picasso Museum. Also, you can buy the Paris Museum Pass that allows unlimited access to most museums in Paris including the Louvre museum, Arc de Triomphe, Castle of Versailles. Buying in tourist information areas or going to Parisinfo site for 2 days is € 48. 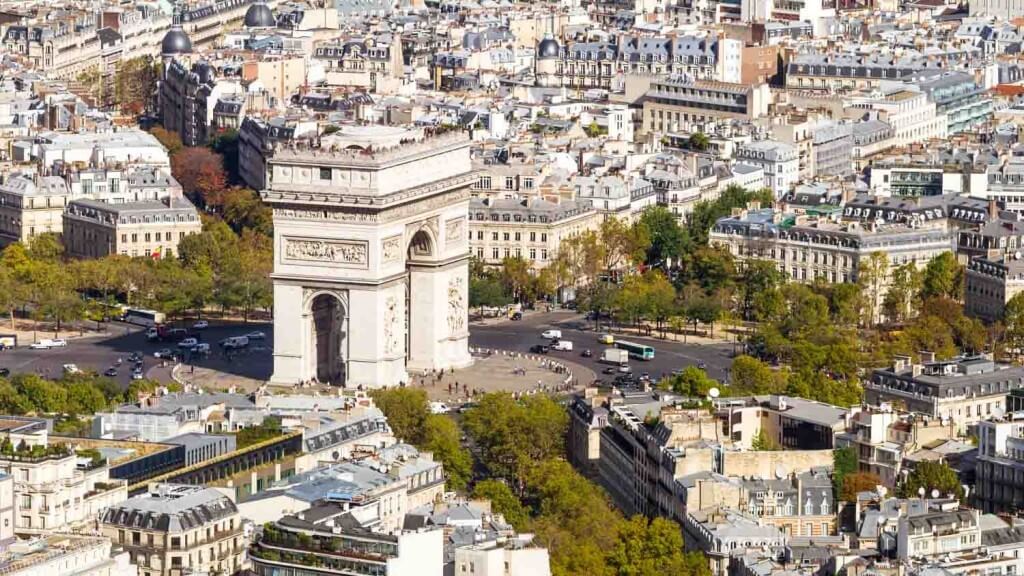